A clear description of two basic mathematical models for the virus.

The article discussed the exponential spread of COVID19 and eventual flattening of the curve in China. The author begins by explaining the exponential growth, the associated mathematical models and the spread of COVID19 in China. The article also goes into discussing modelling of data after a lockdown is implemented. This explains how quarantining helped in controlling the spread in China and also when is it essential to implement such stay-at-home policies.

The beginning of this new decade has not been easy for the people all over the world. In China, we were wrapping up our work and packing our luggage for our Chinese New Year.  Everyone couldn’t wait to share their stories and thoughts with their long-time-no-see family and friends. However, an invisible hand prevented us from doing so — now we know its name: COVID-19.

The virus COVID-19 is new to everyone including scientists, medical doctors and nurses, and the unknown makes us afraid. As a mathematics teacher, what I could do was to explain the data and its implication to my friends and students, calm them down and help them prepare for what is to come, with an understanding of underlying mathematics.

Even now, everyone in China receives a number of messages about the virus every day. But only the data shows the trend. Every morning, the government summarizes the new cases within the last 24 hours. It’s unsettling to look at the number of cases increasing or decreasing day by day. We have to do something to look through the data, not just for the numbers but for a better understanding, but also to find out where we are and what to do.

COVID-19 was first confirmed on January 20th, 2020 to the public in China. The first 20 days’ data since then shows a rapidly increasing trend (Table 1, Graph 1).

No clear pattern could be drawn from Graph 1 so far. However, take a closer look at the total cases (blue line) and focus on the data till Feb 7th (Graph 2) and you will find the curve is smooth: flat on the left and going up on the right. We call this: exponential growth. In such a case, the numbers increase exponentially. Everyone would be happy if their bank savings were growing in this way, but it’s terrible for a pandemic.

But why does the epidemic follow exponential growth? Typically, while modelling a real process, mathematicians make some reasonable assumptions. In this case, some of the assumptions were:

With these assumptions, one possible model can be explained as follows

where P(t) denotes the number of existing cases at time t.

Solving this by standard methods used for differential equations:

where the constant C represents the initial condition, that is, the number of infected cases (the first day in the model, i.e., 291 in Table 1, not the first day of the disease).

The expression for P(t) shows that the number of infected people increases exponentially. According to Graph 2, our C was 291 and k was estimated as 0.3067, which means every patient would infect “1.3589 healthy persons”. That’s a lot! It means the infected population (as well as the beds required in hospitals) will be doubled within 3 days. Such predictions gave a reason for the Chinese government to quarantine Wuhan City, in which cases clustered, just on the 4th day (Jan. 23rd) after announcing the epidemic. Three days later, the construction of Thunder God Hospital started.

Modelling after the lockdown and stay-at-home

Did we really need to quarantine Wuhan? Probably most people would say “yes” in answer to that question because things were the worst there and people in other cities wanted to keep their cities safe. The following graph shows most of the cases in China had occurred in Hubei Province. (Wuhan is the capital city of Hubei Province.)

After quarantining Wuhan, most of the infected people were not allowed to go out. Fourteen days later from Jan. 23rd, which is Feb. 6th, the number of new cases were kept under 4000 except for those first two days using a new testing standard.

Were things getting any better? To see this more clearly, we can upgrade the exponential growth model. Because in a quarantined city, the total population is fixed (i.e., 10 million in Wuhan). We call it environmental capacity. “Capacity” here means a maximum, a ceiling to the total population, or, fewer and fewer individuals have the potential to be infected. Another example is fish in a pond. The size of the pond actually restricts the maximum number of fish. In this case, an extra factor is

included in the exponential growth model:

where Pmax is the maximal capacity. (In our case, it’s the total population that all infected patients can have contact with.)

We call this the logistic function.

In real-life cases, data would never match a math function perfectly. Even though the data did show a S-shape similar to the logistic function. From Graph 7 below, we can notice the S-shape was being formed more and more clearly from March 2nd. It becomes flattened.

Besides quarantining Wuhan, the government carried out the stay-home policy as well. Everyone found the policy ridiculous during the New Year holidays. Usually, by tradition, we visit family members and old friends every day. As an example, a Chinese couple with children may go to their grandfather’s place in the morning and have lunch with him. Then visit one friend’s new house and have dinner with another friend’s family. At night, they may have to drop by a cousin’s home and play Mahjong. It means, however, if the father in the example is infected with COVID-19, on average, he would be in close contact with more than 10 people in a day. Comparing 10 to 1.3589 above, a normal New Year holiday was extremely risky to anyone. It seemed there’s no choice even though no one was 100% sure the policy could save them.

As time went by, the data assured us. After carrying out the stay-at-home policy, everyone could not have contacts with others, except for the people they lived with. It actually helped. Recall the assumption in our exponential growth model:

The stay-home policy reduced the chance of close contact with the others, directly lowering the value of k. Indeed, wearing masks also lowers k by transferring close contact to not-close contact. Comparing some policies or public health actions to the parameters in the two models above, we can summarize as follows. 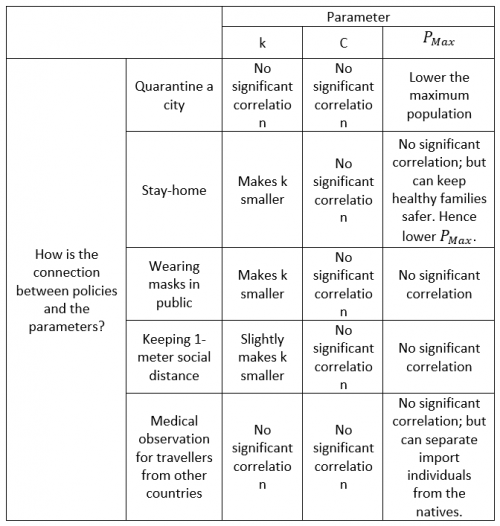 From the table we can see that C would never be changed since it is the initial number of infected individuals, which is fixed in the data at the time of modeling. But k and Pmax are affected differently by different public health actions.

One thing is interesting here. Mathematically, the stay-at-home policy has no direct effect to the maximum population in the logistic model. There are two reasons that can explain this. Firstly, logistic models are seldom used in early stages of an epidemic. Secondly, staying at home cannot guarantee people will completely stop physical contact with each other. Some countries have started putting different kinds of stay-at-home policy restrictions depending on the number of cases in that region. So we don’t have to stay home when there’re few cases, as well as when there are no active cases outside hospitals for a long time like China and South Korea now.

Finally, here I want to say thank you to those who devoted themselves to this war. I hope everyone in other countries may stay healthy and go back to normal life soon. 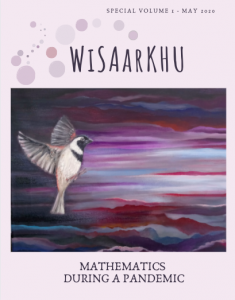